Where Every Dollar Goes

Presentation by the County Administrator

At the Board of Supervisors Meeting on Wednesday, March 28, 2018, County Administrator Kris Tierney gave a presentation on the Fiscal Year 2019 proposed budget. 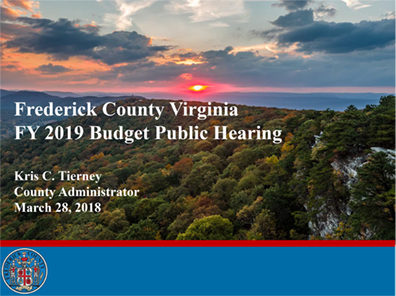 (click on the dates to view materials distributed at each meeting)

March 14, 2018:  The first item for discussion at this work session was what to do with the $1.4 million in excess funds budgeted in the General Fund for the School Debt Service transfer. It was agreed by majority decision to reduce the $2.5 million used from fund balance to balance the budget, making the total fund balance used to balance the FY 2019 General Fund budget equal to $1.1 million. The next item at this work session was a presentation by the Sheriff on the needs of his department, concentrating mainly on the eight positions that he requested to be funded in FY 2019. After this presentation, it was agreed by majority decision to take the full $1 million derived from the proposed one cent real estate tax increase and place it in a contingency line and have discussion at a later date as to the best use for those funds with a possibility being School Resource Officers for the Sheriff. The budget public hearing is scheduled for Wednesday, March 28, 2018 at 7:00 PM. Another work session was scheduled for Wednesday, April 4, 2018 at 5:30 PM to discuss any possible changes to the proposed budget before its adoption on Wednesday, April 11, 2018.

February 28, 2018:  It was decided at this work session to advertise a budget using Scenario H with the only changes being to include a $0.01 cent real estate tax increase as well as increase the aircraft tax to $0.50. Discussion took place about the funding of new positions; however, it was decided to move forward with the budget advertisement without a final determination on the allocation of new positions.

Following the school presentation,  the Frederick County Board of Supervisors Chairman began with a proposal using Budget Scenario B. The Chairman's Scenario included all 20 requested firefighters to be funded. This Scenario includes a 3 cent tax increase but the Chairman proposed using $1.8 million of the $4.3 capital/debt reserve in order to fulfill these needs. It was requested by several other Board Members to adjust Scenario H to include all 20 requested firefighters. These two new Scenarios will be provided for review and discussion at the next budget work session on February 28, 2018.

February 14, 2018:  The first item discussed was the Vehicle Replacement Assessment Model. This model breaks down all new vehicles requests in a budget cycle and ranks them using a point system that considers factors such as type of vehicle use, total mileage of vehicle, number of times the vehicle has been in repair shop, condition of vehicle, and repair costs. This model would be used beginning with this budget cycle. The Board of Supervisors was pleased with this model and found it to be a very useful and comprehensive tool.

Next, eight General Fund budget scenarios (A-H) were presented.  The discussion resulted in the elimination of Scenarios A, E, and F.

The Board asked that staff provide a list of the reductions that were made to arrive at these scenarios at the next budget work session scheduled for February 21, 2018.

February 7, 2018:  The Fire and Rescue Chief presented information on the request for 20 new position FY 2019. He is proposing to increase minimum staffing at the Round Hill and Millwood Station, and to increase relief positions who will be stationed at Middletown, Gainesboro, Greenwood, and Millwood Station. Fire and Rescue overtime was also discussed.

The School Superintendent provided a brief overview of the school system's FY 2019 budget request. At this time, the additional funds being requested from the Board of Supervisors for School Operating totals $6,643,245 -- $5,824,068 in additional funds and a transfer of $819,177 from the Debt Service Fund.

Budget scenarios were provided to include 3, 4, 5, 6, and 10 cent real estate tax increases, as well as two scenarios that reduced the capital contingency of $4.3 million and split that amount between the General Fund and the School Operating Fund. Staff was tasked with providing preliminary reductions to the General Fund budget for each scenario to discuss at the February 14 budget work session.

A debt service schedule was provided to include the 12th elementary school and Aylor middle school replacement.

Supervisor Dunn provided a history as well as a future outlook for population in Frederick County. Supervisor Dunn also provided an overview of future capital projects that are included on the School Capital Improvement Plan and the tax increases needed to cover these projects.

January 17, 2018:  FY 2019 preliminary budget scenarios were discussed at this meeting. The scenarios included only General Fund revenues and expenditures due to school system numbers not being available at this time. Future debt service was discussed including the 12th elementary school and Aylor Middle School Replacement. It was requested that scenarios with 3, 4, 5, 6, and 10 cent tax increases be provided at the next work session.